You never know, as a musician, when you might be desperately needed. Traveling in Northern Spain one summer with my son, we were simply “roadies” on a youth concert tour, enjoying the sights, tastes and sounds of a beautiful country we’d never seen. The young musicians (aged 13 through 20) had been rehearsing for this trip for many months, excited to play in famous churches and cathedrals in Spain, still having plenty of free time to have fun. Matt, my son, had played in this youth orchestra, but he was now a young man in college who hadn’t touched his cello in over two years. He was along to discover Northern Spain and not play the cello. 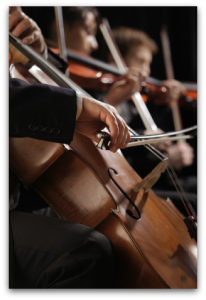 Arriving at the Barcelona airport amidst a glut of suitcases, instrument cases and pillows and blankets from the long trip, kids and adults waited at baggage claim. With horror, we discovered that a girl didn’t make the flight and wouldn’t be playing in the tour. Oddly, her cello arrived intact in its bright purple case.

The director of the orchestra flew into action. Speaking six languages and quick to think on her feet, she knew that Matt had played cello in her orchestra a few years before, and she danced over to us. Hearing about the player-less cello, I cheerfully volunteered Matt to take her place and perform in the concerts.

He was not happy with me: his leg started jiggling and his glares in my direction would burn holes through steel. The solitary commitment of learning music he’d never seen, rehearsing with the orchestra, and four concerts would take away his free time to explore the city on his own.

In what I hoped was a business-like tone to Matt, I added up the potential hours to commit to practicing (6 hours), rehearsing (6 hours) and performing (4 hours) in Northern Spain – only 16 hours out of the trip in exchange for a ton of memories playing in beautiful settings. After his initial shock and anger subsided, Matt went along with the scheme. Cellos are needed as rhythm, drama, foundation and voice … and their youth orchestra was missing one-quarter of the cello section.

If only that cello case wasn’t bright purple.

When all fifty-two of us arrived at our first hotel in Barcelona, Matt dutifully started learning the music. He picked it up quickly and became comfortable again with the cello, reuniting with an old friend. Now what to do about the required concert attire that he didn’t bring on the trip? The first concert was in the ancient city of Toledo, an astonishing maze of twisting streets embracing dwellings hundreds of years old. An ancient city has a special soul to it: you can feel it in your skin as you walk through the lanes where so many feet have walked before you.

Coming to the orchestra’s rescue at an anxious moment, parents and kids were glad to offer Matt pieces of clothing of what passed as concert attire … except nobody had a black jacket or dress shoes to spare. The creative director asked a handsome waiter in our restaurant (the evening of the first concert) if she could borrow his jacket for the evening, and he agreed. In the church of Santo Tome in Toledo, Spain, Matt was the only musician wearing white tennis shoes, but everything else was perfect.

On the trip through Northern Spain, we visited the Prado Museum, the Royal Palace in Madrid, La Sagrada Familia and Montjuic in Barcelona, the Castle of Templas Ponferrado in Astorga and the coast of the Rias Baixas. If it weren’t for this youth concert tour, these musicians never would have seen these remarkable sights that leave you changed in heart and spirit.

The last concert was in the Cathedral of Santiago de Compostela, the conclusion of the 800 km Camino de Compostela pilgrimage that begins in Northern France. The musicians prepared in the hotel for its concert that evening. The corridor of the hotel was long and cleanly carpet-less: the kids practicing their own instruments – flutes, string bass, violins, cellos, violas, and percussion – filled the hotel with a beautiful cacophony of promise of orchestral harmony. I felt like I was in a movie walking down that hallway.

Sitting tall, focused and expectant in those folding chairs as part of a musical team in front of altars of cathedrals makes the solitary hours of practicing worth it. The clothes can be borrowed: your experience and talent cannot be on loan from another but is only yours. Musicians: don’t be afraid to catch an opportunity when it comes your way. Your memories last a lifetime.